Twelve days ago I began an experiment in lifestyle design and financial independence. I moved into a travel trailer at a lake community just outside Raleigh. At the time when I moved in, there was no running water, no electricity, no phone service, and no internet access at the site. However, this is only the beginning of my experiment.

The first thing most people have asked me is, "why?"

Why would I do this?

Why would anyone choose to live this way?

What would possess any sane person to move out of a 1,000 sqft home and live in a 200 sqft travel trailer?

Even more, why make the move without running water, electricity, and the conveniences of modern communications?

Let me begin by pointing out that I'm not making the claim that this is the right choice for everyone, or even for most people. However, it's a great option for anyone interested in the tiny house movement that is beginning to take hold. As the organizer for the Triangle Tiny House meetup group, I fit right in with this group.

Inspiration from the desert

Some time ago I came across the story of a young entrepreneur that had recently graduated college. He wanted something more than the 9 - 5 jobs and mortgages his peers were accepting as the status quo. Instead, he bought a small piece of land in the desert outside a small town in the southwestern United States. For several months, he camped in a tent there and rode his motorcycle into town to use the internet at the library. Each morning he would wake up with the sun and work at the library until they closed. At closing time, he would gather his laptop, MP3 player filled with podcasts, and a few booked he borrowed from the library. On his drive back to the camp site he would pick up some dinner and breakfast for the next day.

This went on for months as he built his business, earned his first customers, and eventually grew a significant income. Today, this person has a business with enough revenue that he can afford a rather nice place to live and still put a significant chuck into savings. Unfortunately, I don't recall the name of the site where I read about this or the name of the person. If you have seen this story before, please tell me where so I can cite it here.

One of the goals I have been working toward is location independence. I experimented with this over the summer of 2014 when I traveled to Spain and Turkey for a month. At that time, I was working as a freelance writer and WordPress administrator. These jobs are done online and did not require me to be in any one place at any specific time. I was able to keep my income the same while only slightly increasing my expenses during that month. The biggest reason my expense increased was the rent I paid for an apartment back in Raleigh which I was not occupying while I was in Europe. Upon my return, I set about looking for a way to free myself from this rent payment while traveling.

I have always been rather frugal and, until relatively recently, was unaware that a number of other people have similar interests. There has been a growing number of people pursuing Early Retirement Extreme thanks in part to there being a website and book that defines this concept. The basic idea is that you should put 70 - 80% of your income into investments for retirement, not the 10% that most financial advisers would suggest. Within this group, people tend to achieve financial independence within 5 - 10 years and it's not uncommon for someone to be 25 - 30 years old when they become financially independent.

Currently, I work as a digital nomad. This means I have a laptop that I take with me while traveling around the world. Anywhere I can find a decent connection to the internet can be my office for the day. Right now, for example, I'm writing this post in the community center at Lake Royale while a group of people are playing bingo. Just outside the window, I'm watching the sun set over the lake and colors of the sky reflecting in the water. 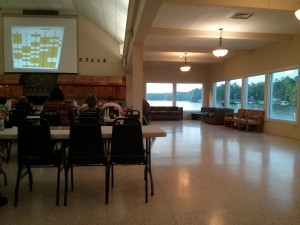 Moving to the lake has required some effort. While we're going to have water, electric, and internet services installed - these things are not currently in place. By the end of the month, however, everything should be setup.

In the mean time, Lake Royale has camp bathrooms with running water and showers. Additionally, there are laundry facilities, a community pool, beaches on the lake, a put-put course, several picnic areas, parks, and outdoor grills. There is also a community center with a pool table, a community library, wireless internet access, and outlets to plugin a laptop. While we're waiting for services to be connected at our lot, we can rely on these facilities. Even after we're hooked up, I plan to spend some time each week working at the community center and the Bunn library just for a change of scenery (I don't like working in the same place every day).

I've had to downsize my personal belongings quite a bit, and I'm not someone that tends to have a lot of things. However, moving from 1,000 sqft down to 200 sqft will cause anyone to find a few items in the back of their closet which they could live without. If you're thinking about moving into a tiny house, I highly recommend following the same advice given to travelers.

"When preparing to travel, lay out all your clothes and all your money. Then take half the clothes and twice the money." ~ Susan Heller

While the move doesn't impact the fact that last month was our last car payment, it's still a major up-tick in our finances. Our base living expenses went from $895 each month down to $193. This does not include things like gas, food, and insurance. I'll cover the changes in our finances in greater detail in a future post. For now, it's sufficient to show that we've had a reduction in our monthly bills by about $700. That adds up fast, $8,400 by the end of just one year!

We have decided to only spend our summers at the lake. This means we will be looking for a place to live from mid-October until mid-April. We'll leave here just as the last of the leaves are falling from the treas and return shortly after the last of the overnight freezes has passed.

This year, Barbie has been pushing for us to spend the winter in Malaga (a city in southern Spain). We have been looking at some apartments there and could rent a place with utilities and internet for around $500 per month. Additionally, the flights will only cost us around $100 each for round-trip transatlantic airfare (thanks to Cheap Flight Secrets).

Next year, we're not sure what we'll do for the winter. We've been talking about an epic road-trip throughout the United States, spending some time in Playa del Carmen, or visiting Buenos Aires.

A day in my life

This morning I work up at 8:30 am, well rested and ready for the day. The birds were chirping outside my window and the bedroom was filled with sunlight. I started my day with a pear for breakfast and some quiet time listening to the wilderness around us. Barbie and I loaded up the car and drove to the laundry facility at the north end of the lake. We dropped our clothes into a washing machine and took off with our cooler for some ice. The drive from the laundry facility, out of the lake, and into Bunn (where the ice machine is) allowed us to return with only a few minutes to wait before the laundry was done.

We drove home and hung the clothes on the line to dry in the morning sun while we unpacked a few boxes and straightened up a little. We decided it was getting hot at around noon and we drove up to the pool. After two hours of swimming and soaking in the sun, we showered at the pool facilities and returned home for lunch.

Just as a summer storm was rolling in over the lake, we decided to race for the community center and get some work done on the internet access there. I wrote a few article for clients, installed updates for the WordPress websites I manage, paid some bills, made a few phone calls, and now I'm writing this post.

This evening, we will return home for dinner and be asleep in bed some time between 9 and 10 pm. This is a typical day for us with little variation. Rather than swimming at the pool, we may choose to go to the beach at the lake. Instead of doing laundry, I may go fishing or paddle my canoe around the lake. Some mornings we may get up at 6 am and others we'll sleep in until 9 am. However, we generally go to bed around sunset, wake up around sunrise, eat natural foods, and get lots of exercise. This is a lifestyle that is improving our health, not harming us - and that's not something we could say before we moved here.

22 comments on “The Lake Royale Project”