Back in 2011, I spent six months living in Barcelona. When I came back from this trip, friends and family said that I looked great. They all asked if I had lost weight, so I hopped on a scale. To my surprise I had dropped 35 lbs without even trying!

By this point in my life I had given up on losing weight and became comfortable with the idea that I would always weigh 250 lbs. I had tried losing weight through a myriad of diets and even went to the gym as much as six days a week. Sure, I could drop ten pounds if I worked hard for a month - but that would all come back the next month.

During the time I was in Barcelona I didn't diet or exercise in any special way. I simply lived life as the people in Barcelona do every day. I attempted to keep to the schedule of the United States but found that everything was closed on Sundays. I spend two weeks trying to fight this system and get work done seven days a week before I finally gave in and realized that Barcelona insists you will spend Sundays at the beach.

On top of the working and dietary changes that became part of my everyday life, I also used public transit to get everywhere. Even during my excursions to Paris, Rome, and Andorra - I took a train to a plane to a bus to my hotel. At every connection I was getting out of one vehicle and walking to a different terminal for my next connection. This didn't amount to the same type of exercise as going to the gym, but provided short bursts of effort throughout the day. 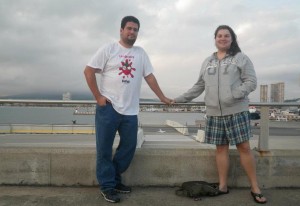 After returning to the US, I attempted to keep the weight off. I tried various diets and exercise regimes. None of these worked for me and the weight crept back on - with a little extra. Until this past January!

I realized that the foods in Europe are much different from what is found here in the US. Their standards make the regular food in every grocery store much more like the organic and free-range food sold in the US. For this reason, I've adopted a diet rich in organic and free-range food. I had already given up fast food and increased the vegetables in my diet, now I'm focusing on whole foods with as few pesticides, hormones, and antibiotics as possible.

Additionally, I found that working out in the gym for an hour every day is not as effective as making simple changes to my lifestyle. I no longer fight for a close parking spot, rather opting for a little extra walking. If I'm going somewhere in the same shopping center or just down the road from my home - I walk. Doing more walking and less driving gives me a little exercise spread out through the whole day.

Back in January I weighed 265 lbs, thanks to the extra weight I put on after returning from Spain. From January through May, I dropped down to 240 lbs. This is one of the reasons I moved to Lake Royale. The lifestyle at the lake is much more like what I found in Europe.

Surrounding the lake, there are many farms. Three of these supply organic produce and free-range, pasture-raised, hormone-free, antibiotic-free livestock. These are now my regular places to shop for groceries:

Forget about shopping at Whole Foods or Trader Joe's. This is local, quality food grown by farmers I talk to a couple times a week when I'm shopping for groceries.

In addition to great, high-quality, foods - I exercise all day. Using the bathrooms and showers at Lake Royale requires me to walk about 0.1 miles each way several times a day. This is a long enough walk that it's not too difficult, but I move more and sit less. Using the Fit app on my Android phone, I've been tracking my exercise for months. Prior to my move to the lake, I would get 30 minutes or more exercise only about 3 or 4 days a week. Since making the move there has not been a single day that I have spent less than 30 minutes exercising.

In addition to walking back and forth from the bathrooms, I also spend a significant amount of time at the community swimming pool. This week alone, I was at the pool for a total of 8 hours. I also enjoy fishing along the banks, swimming at the beach, playing put-put, and paddling my canoe around the lake.

When I hopped on the scale today it said I was down to 235 lbs! That's 30 lbs lost since January and five of those were in the last two weeks. By the time I return to Spain in October, my goal is to be under 200 lbs.

I feel I should mention that my goal is not simply to weigh less, but to be healthier. In addition to tracking my weight, I'm also monitoring how I feel walking around the lake and riding my bike. For now, I can only ride my bike from my place down to the tennis courts. That's about 1/2 mile, but I'm working to extend that.